While the GMT was designed for pilots and frequent air travelers, the Explorer II was built for speleologists exploring caverns beneath the earth’s surface. For many years, the Rolex Explorer II stood in the shadow of its older, aviation themed brother, the GMT-Master.
The original Explorer II had a very special appearance, and its poor initial sales were huge enough due to its oddly specific target demographic rather than an overlap with another watch in replica Rolex’s lineup. The successor to the Explorer II, this model was largely based off of the GMT-Master line of watches, and its numerous, similarities extremely hindered potential Explorer II sales. 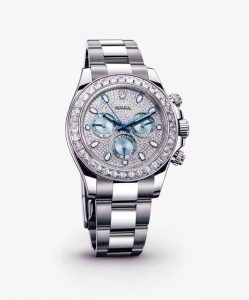 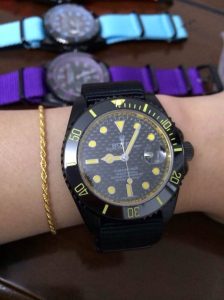 Throughout its history, consisting of several distinguished reference releases, the fake Rolex’s Explorer II line of replica watches more-or-less remained a GMT-Master with a fixed 24-hour bezel and the option of a white dial. However, the replica Rolex released a new version of the Explorer II – one that followed a design entirely unique to itself at Baselworld 2011.
The new Explorer II featured a brand new movement – one never before seen in any other Rolex model – the caliber 3187, and also featured a larger, 42 mm case. With 31 jewels, a blue Parachrom hairspring, a variable inertia balance wheel, and the addition of Paraflex shock absorbers, the special movement can be considered a progress over the caliber 3186, which is found inside Rolex’s current GMT-Master II line of watches.
Although relatively minor, the white dial option, bright orange 24-hour hand, and extra 2 mm in case diameter help make the watch a significant departure from Rolex’s GMT-Master II line of watches. While the contemporary GMT-Master closely resembles the modern Submariner, the Explorer II has now become a watch entirely of its own design; and it does not resemble any other watch in the replica Rolex’s current lineup.
Another variation that significantly helps separate the this watch from the contemporary GMT-Master II is the revival of its bright orange, 24-hour hand – a trait borrowed from the original Explorer II. The replica watch had its triangular-shaped 24-hour hand finished in bright orange so that cave explorers could easily differentiate between day and night when viewing their watch in low-light conditions. Subsequent generations of the Explorer II shared a 24-hour with the GMT-Master and GMT-Master II lines of watches, so the revival of the orange 24-hour hand certainly helps tie the model to the Explorer II’s past.
For multiple decades, the Explorer II became the forgotten sibling to the replica Rolex GMT-Master line of watches; however in 2011 (for its 40th anniversary), Rolex finally gave the Explorer II the long awaited upgrade that it deserved. The replica watch is a modern watch that fully embraces its past and history without ever losing sight that it is a contemporary timepiece. While the replcia Explorer II from Baselworld 2011 is a bold, modern watch by all standards, this watch retains the cornerstone DNA that defines Rolex’s Explorer II line of watches.